I promised some time ago to do an update on Lina’s milestones at two years old. I’ll get to that in a moment.

We’ve been a little crazy trying to get fully settled into the new home now that the old one is finally sold. I do a lot of craigslist buying, which means a lot of running all over creation to look at furniture that may or may not be a reasonable option. My worst experience so far was the woman who told me her couch was in good to excellent condition, stood me up for one appointment, and then on my second try showed me to a couch that had been utterly destroyed by her four children and claimed to just now be noticing the stains. For all its faults, craigslist has allowed us to buy a lot of decent quality furniture on a very tight budget. The solid farmhouse dining chairs were a Goodwill find, although I have yet to get them refinished. Ultimately, I find it very rewarding to piece rooms together from bargain finds. There are a lot of dream projects that will have to wait for a later time, but we’re at least gradually leaving behind the “just-moved” look.

And now, to Lina. Our sweet girl is 25 months, and I owe an update on her progress.

I was rocking Lina before her nap today and realized I have to stretch to fit her head under my chin. Her growth and milestones happen more slowly than for many typical kids, and, as I’ve said before, that sometimes makes it easy to forget that she’s still growing up very fast. I feel such pride in her as we work hard on her next milestones. What a gift, being her mother. 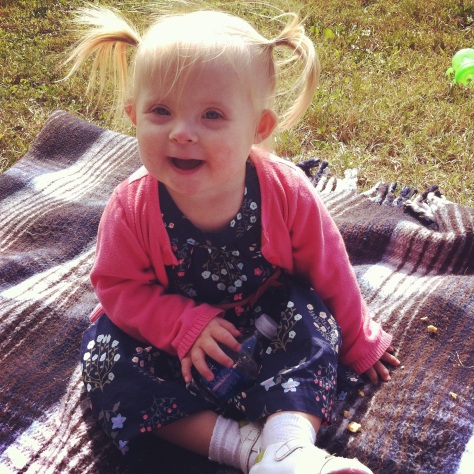 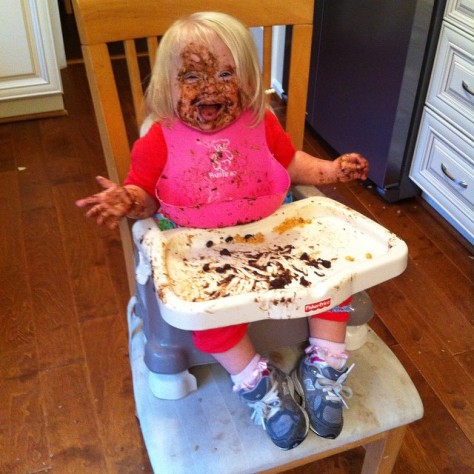 Black beans for lunch, or a scene from a horror film?

Connecting through the Arts