There is little doubt in my mind that having to wait longer for milestones means we appreciate them that much more when they come.

Turns out Corin’s monkey antics were just the thing to bring on Lina’s first real laughs. The video is dark and wobbly, and we didn’t catch the first round of laughs, which were even better. But I could watch it over and over, just the same.

Corin was terribly pleased at his success, and I even got my own little giggles this morning, tickling her neck with my kisses.

These are the moments I live for.

The house is quiet, it’s not yet late enough for regret over not heading to bed right-this-minute, and so I will try to do a little catching up on recent events.

The big news around here is that Jon has a new job. He is stoked about this gig. Starting June 3, he will be chief technology officer for a start-up doing some pretty cutting-edge stuff in the field of wearable computing. (Call us gluttons for punishment, but it turns out start-ups are his thing. Also, do I get any geek cred for using the term “wearable computing” properly in a sentence?) It is not an easy thing for him to let go of day-to-day involvement with the start-up project that has been his baby for the last six years, but after some serious deliberation, we both agreed it was the right time for him to move on to new adventures. It’s a big change, but I love seeing how excited he is about this new project, which synchs with his interests and skills in uncanny ways. And added bonus: He will continue to be able to work from home. We anticipated that a job change would involve a possibly-lengthy commute to an office, so this feels like a gift, especially given the thoroughly-established expectation that work days will no longer bleed into the wee hours. Our kids are incredibly lucky to have a daddy who is present in their daily lives, even if it’s just to pop up to say hello or to grab a quick lunch between meetings. I know there are times Jon does not relish hearing the wails of three-year-old tantrums carrying down the stairs, and there may come a time when his company establishes a Nashville office and he is away from home during the day. But for now, this definitely lands in the “win” column.

Otherwise, life is proceeding relatively uneventfully. I have for a little while now been watching a sweet one-year-old girl one or two days a week. Corin loves Claire, and we have settled into a pretty manageable routine. I have even braved a couple outings with all three kids, and as with any new challenge, the trick is to just do it. (I guess Nike beat me to that revelation by quite a few years.) I’m developing biceps from carrying two babies around, which doesn’t hurt my feelings a bit. Also, I see a distinct advantage to Corin learning now to deal with a small person who wants to play with his stuff. They do pretty well together. You might even say they have a little romance going. 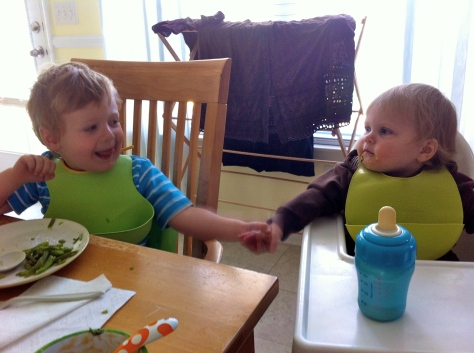 Change comes. Life continues. We are tired but so very blessed. That about sums it up.

It’s surprisingly hard for me to type that sentence, there by itself. I want to apologize for it, to follow it up by saying that I know my gripes are so small compared to real problems, to caveat by noting all the moments that I look at my children and marvel at the privilege of being their mom, of sharing my days with them.

There is all of that. But the truth is, I am tired.

Lina is going through another phase of difficult feedings for heaven knows what reason (my suspicion: the wind is blowing the wrong direction), Corin is fulfilling the prophetic musings we heard from friends for years about how much harder age three is than two (see this blog post for a brilliant snapshot of recent days), and the list goes on with a lot of normal, everyday stuff that just adds up to a tired me, needing a break.

Which is why I am taking one.

This Sunday, Jon will be handling all parenting responsibilities, and I have glorious plans for sleeping in, a pedicure, shopping and whatever else happens to strike my fancy. All of this I will be doing alone. Gloriously, entirely alone. Me with my thoughts and an entire day of freedom.

It’s just me and the kids for a couple days, so I took a picture yesterday to buoy our spirits while we miss our daddy. It may have taken a promise of mac and cheese for lunch to get Corin to cooperate.

That boy’s smiles are hard to capture these days. I’m practicing my trigger finger.

There is a lot happening in our world. Maybe sometime in the next, say, month, I’ll have time to sit down and write more about it. For now, we’re riding out a ridiculously slow spring in hopes that truly warm weather is just around the corner and thanking God for a lot of big blessings.