I am pronouncing the nursery FINISHED, although there will still be a few minor additions (like a changing pad and cover) to come. Pictures in a moment, with a list of sources at the end.

First, I want to say a big thank you to my wonderfully talented friend Anca Sommerville, who took almost all of these photos. Second, I also owe many thanks to my husband, who put in long hours painting the closet and installing the new organization system, figuring out how best to hang my tree branch and patiently examining the Jeep to make sure I hadn’t destroyed the undercarriage while trying to pull over to acquire said branch.

And now, we’ll get right to it.

(Purple candle is from our wedding 10 years ago) 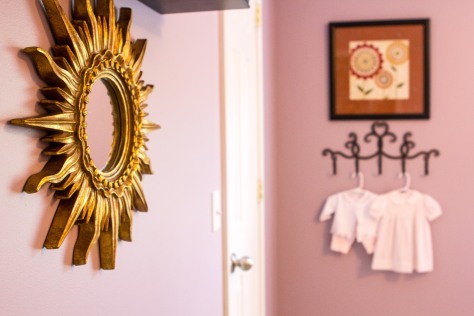 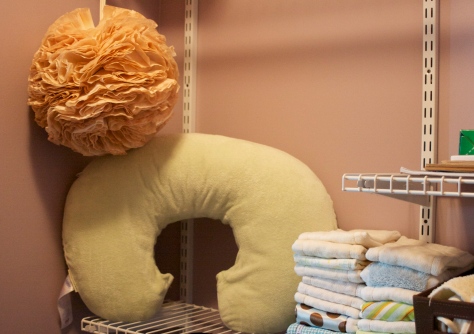 Truthfully, I don’t love that term. “Nesting” just sounds so…overly-domestic. But I can’t think of a better way to describe what’s been happening around our house the last week. I have been cleaning out cupboards and closets, donating or throwing away useless junk that’s been accumulating for eons, reorganizing every area of clutter I can find. I feel an urgent need to create as much order as possible before newborn chaos descends upon our household. It must be contagious, because Jon hung a new shelf in the pantry/laundry area to create more storage space, fixed a leaking shower faucet that had been driving us nuts for weeks, and has gotten right into the spirit of moving, reorganizing, and donating or throwing away remarkable amounts of stuff.

If Baby Girl were to follow Corin’s schedule, she would be here in four weeks. A bit shocking, no? Thank goodness we’ve been knocking out that to-do list at a rapid clip. I am THIS close to having the nursery finished and ready for sharing pictures. I hope to have that post ready for you in the next few days.

It probably sounds like all we do around here is get ready for Baby Girl, but that happens amidst the much bigger job of keeping up with our increasingly-active toddler. Corin has turned into quite the talker. We have a running commentary for pretty much everything that happens at our house. It’s pretty fun most of the time. His ability to make a mess has increased dramatically. Toys and household items appear in the strangest places. The other day, he came to inform me, “There is something in the potty.” My hopes of a new potty training break-through were dashed as I fished our dog Tennyson’s rope toy out of the toilet. I have learned to first check the laundry basket (Corin’s or, that failing, the baby’s) any time shoes or other essential items are missing. And oh, the places one finds Matchbox cars…

Corin’s creativity and imagination are developing rapidly, which brings plenty of new challenges. Last week, I heard him banging a toy on what I thought was the floor. Later, I found an alarming area of damage on the dining room wall that clearly indicated the actual location of the banging. When I asked him if he had caused this new mayhem, Corin’s immediate response was, “No, Tennyson did it.” I had to turn around so he couldn’t see me laughing. We then addressed the principles of the matter. A more experienced mother since advised, very wisely, that if you know your child did something, it’s better not to set him up to lie. Clearly, the instinct to blame someone else begins very early. Just wait until he figures out what a great scapegoat little sister makes.

I think I might win the award for strangest pregnancy symptoms. At the very least, these are not ones any pregnant women I know have thought to mention.

1.) An obsession with brushing my teeth. Any kind of sudsy scrubbing currently brings an abnormally high level of satisfaction, but teeth brushing is one of the highlights of my day. (I should clarify that this was not the case during the first half of my pregnancy, when brushing my teeth was the moment most fraught with risk of puking.) I suppose my dentist would be pleased.

2.) Suddenly enjoying a few normally-offensive odors. I let Jon take over applying the oil-based primer for Baby Girl’s crib as soon as I realized how strong the fumes were, but strangely enough, I found the smell appealing. I’m pretty sure this has never been the case before. Same thing with the latex paint fumes after her room was freshly-painted. Don’t worry: We ventilated thoroughly and I steered clear. But sure enough, the few whiffs I got smelled good to me. WEIRD.

3.) Increasing numbness in my hands. I know circulation issues are common in pregnancy because of increased blood volume. I’ve had issues for months with my hands and arms going numb at night. But it does seem odd that now my thumbs and first fingers on both hands are permanently tingly and partially-numb. I don’t remember this from my last pregnancy.

So there you have it: I am either a pregnancy freak of nature, or these are symptoms people just don’t think to mention. If it’s the latter, feel free to consider this a Public Service Announcement.

It is inevitable that anyone meeting Corin for the first time will be struck by how much he resembles his daddy. There is no question: His looks come from Jon’s side of the family tree. There may be a little of me in there somewhere, but you’d have to search pretty hard to find it. I’m okay with that; I happen to think Corin’s daddy is pretty handsome.

Hearing comments about Jon’s “mini me” has gotten me thinking again recently about what Baby Girl will look like. We’ve gotten to see lots of pictures of our donor families’ kids, so I mostly imagine someone who looks a lot like their daughter. But of course, not all siblings look alike, and I do wonder if the prenatal environment has any impact at all. There are similarities between our two families, and I wonder if we might hear that familiar comment from unsuspecting parties: “Oh, she looks so much like you/your husband!” I also wonder: Will it ever be difficult to look at her and see a striking resemblance to a biological parent or sibling?

Ultimately, I don’t think it matters much to me who she looks like. She is a member of our family as surely as Corin is, and I so look forward to getting to know her. I may have said before that it is such an awesome part of parenting to watch your child’s unique personality and physical traits take shape before your eyes. I’m pretty certain that will be true regardless of where those traits originated. It may not be daddy’s chin, but it will be HER chin. Those feet won’t be my feet, but they will be the feet I have felt kicking all these months. Her eyes, her nose, her hair… They will all be traits of the daughter I love with all my being.

(Wait, did I just mix Olympic and baseball metaphors? Oh well.) We are now less than nine weeks from my due date, which seems like a very short time when I start ticking off the items on my before baby to-do list but a very long time when I put on a maternity shirt that no longer covers my belly or wake at 2 a.m. with searing heartburn.

We are so excited about meeting this baby. It looks like we have finally settled on a name, but I hesitate to broadcast it too broadly in the off chance we change our minds. We may be baby name over-thinkers. It does add to my confidence in our choice that Corin pronounces it beautifully.

The nursery is nearly finished. I am not too humble to say I think it’s looking awesome. Pictures to come once the finishing touches are done.

We got back Tuesday night from our much-anticipated beach vacation. Hilton Head Island was our honeymoon destination, and it was so nice to have several days there to relive the romance while Corin lived it up with Mimi and Grandpa. Life happened, and the “romance” included a scorching sunburn through layers of sunscreen for my red-headed husband and two jellyfish stings for me. But we still had a lovely time. We even got to meet up with dear friends on their way through the area. We didn’t do much picture-taking, and what we did get was late in the evening, but here’s a sampling of our anniversary/babymoon/husband’s birthday trip. (My vanity is preventing me from sharing the only picture of the two of us together, because it is terribly unflattering.)

I am very thankful for those few relaxing days together in a lovely place. Soon we’ll be immersed in a newborn haze, fumbling our way through the transition to parents of two. Maybe on a few of those sleepless nights, it will help to remember the sound of crashing waves and the feel of damp, salty winds.